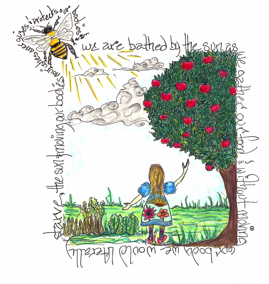 The most revolutionary idea in nutrition is the most simple, so simple, so basic; it is about returning to nature and traditional ways of gathering and thinking about food. Nature’s Principle is:

Nature tells us what to eat, the quantities to eat it in, how easily and when it is obtained in nature.

Air is the nutrient we are most life dependent on, and arguably the most important and essential nutrient needed for our growth, (we cannot survive minutes without it) conveniently it is also the most abundant nutrient on earth. Isn’t it convenient you don’t have to wake up each morning and wonder where to get your air from? Water is our second most life dependent nutrient (we cannot survive days without it), essential to our growth and the second most abundant nutrient on the planet.

Green vegetation and the food that stems from it is the next most abundant source of nutrients for humans. It grows most abundantly and there are more varieties of vegetation than any other food that we eat. It is ground level, you don’t have to trap or catch it and most can be eaten with little forms of preparation or cooking.

Vegetables are the easiest to obtain and can be eaten raw or cooked. By in large they are most healthy when they are young fresh raw organic whole and as found in nature closest to the source they have been picked from.

The next order varies greatly depending on where you live on the planet. We know that land was valued based on what it could produce and offer to sustain life, thus the prizing of the land of milk and honey and why few wars were fought over lands like Greenland, Northern Canada and Antarctica (unless they discovered natural resources). If you say you live in a dessert or arctic part of the world many people would be curious but few would be envious. Why is that? Because it is so difficult to sustain life.

Next we look at fruit. There are less fruit species than vegetable species. If you have a vegetable seed and a fruit seed, the vegetable seed will produce food faster. Plant a broccoli seed and you have sprouts in days, wait a few months and you have food. If you plant an apple seed, it takes years to produce fruit and even then you don’t eat fully grown fruit , you wait until it ripens where you are rewarded with sweetness, beautiful colours, aroma and flavour, all which happen in the ripening process where most of the nutrients are infused into the plant and once you finally get to that stage it is pretty well fast food.

From there we can look at grains, pulses, nuts, seeds, and spices which we do in Return to Food, but for now consider what and how things grow in nature and compare it to what you eat and how much of what you eat is abundant in nature or not able to be obtained in nature as the farther away from and out of the order it is found in nature your food comes the less vitality you will have. Definitely food for thought.